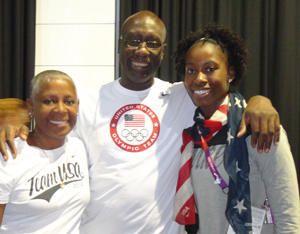 Two UNC staff will be in the stands cheering for their daughter and the rest of the USA Olympic volleyball team today as Team USA takes on China. Megan Hodge is the daughter of Carmen Samuel-Hodge, a research fellow at the UNC Center for Health Promotion and Disease Prevention and research assistant professor of nutrition at the UNC Gillings School of Global Public Health and Mike Hodge, a support services supervisor with UNC Facilities Services. Mike is also the volleyball coach at Megan’s alma mater, Riverside High School in Durham.

“We could not be more proud of our daughter’s accomplishment,” said Samuel-Hodge by e-mail from London.   “To make this team is no easy feat.  Even the players who do not start are among the best at their positions and they play a very important part in making the starters the players that they are, and the US women’s team the #1 team in the world.”

The US Olympic volleyball team has never won a gold medal, but they are the favorite to win this year. At 23, Megan Hodge is the youngest member of the team. The winner of the game against China will receive one of the top slots in the quarterfinals for medals.

Making the Olympic team is the just the most recent in a series of major milestones Megan Hodge has achieved in her volleyball career. She led the Penn State volleyball team to three national championships and was a four-time First Team All American. She was also the top scorer and MVP when Team USA won its third straight FIVB World Grand Prix title this year.  In 2009, she was the co-winner of the Honda-Broderick Award, given annually to the best female college athlete across all sports; she shared with basketball star Maya Moore, who will also make her Olympic debut in London.

“We did not imagine 20 years ago when we left the islands that our 3-year-old would be on the USA volleyball team,” said Samuel-Hodge. “It was one of her goals, along with winning ONE national championship in college. She won three national championships, so we know how hard she works to reach her goals.” 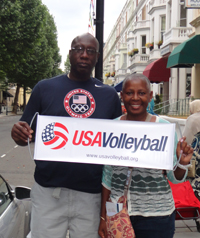 Samuel-Hodge received her PhD from UNC-Chapel Hill and has been a part of the UNC Center for Health Promotion and Disease Prevention (HPDP) since 1995, when she began as a graduate research assistant.  Many staff at HPDP have been following Megan Hodge’s athletic career since she competed with the Bouncing Bulldogs jump rope team from 1996-2002 and are excited to cheer her on in London.

“This Olympics is extremely special because we feel that one of our family members is there completing,” said Avia Mainor, training team lead for the Center of Excellence for Training and Research Translation at HPDP. “We have watched Carmen’s children grow from elementary school athletes to professionals and are very excited for the whole family.”

Fitness and wellness are priorities for Samuel-Hodge in both her personal and professional lives. She leads several HPDP research projects studying diabetes treatment and obesity prevention. She also teaches courses in public health nutrition management for the UNC Gillings School of Global Public Health and holds an adjunct professor position at the Duke School of Medicine.