How can you see the impact of engaged research? Sometimes all you need to do is look at what’s being served to drink at the church potluck dinners.

Linda Riggins began working with researchers at the UNC Center for Health Promotion and Disease Prevention in 2010. The project was focused on implementing an evidence-based intervention in churches to help prevent HIV/AIDS in youth, and eventually led to three other projects, multiple academic publications and presentations, travel across the country and significant environmental and policy changes within churches and increased social capital among the research partners.

However, one of the first changes made was juice. 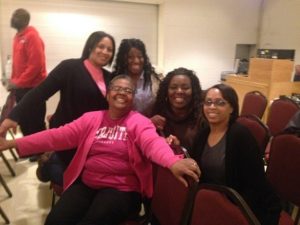 “We call it Reverend Red Juice,” Riggins said. “It’s at every function, and it’s really sweet and dangerous. But what we asked for, and what they did, was start to offer water.”

Riggins provided this beverage switch as an example of how you can see change when conducting engaged research. But she saw other, much larger changes, too, and also saw how trust and relationships can build over time among the right people.

“It speaks to something people talk about all the time and write about all the time, but is hard to live, which is cultural sensitivity,” she said.  “The development of what is your position, your attitude towards, your knowledge of yourself and of the other and what are you going to do to lead in facilitating that relationship being smooth. It could have been a culture shock, but we had such skilled, experienced professionals that we didn’t have a lot of rude awakenings.”

Riggins was the project coordinator for Focus on Youth (FOY) and ImPACT, a project which sought to bring an HIV/AIDS curriculum to youth in churches. It was the first time she had worked on an academic partnership, and the UNC investigators were Alexandra Lightfoot, EdD, Director of the Community Engagement and Training Cores at the UNC Center for Health Promotion and Disease Prevention and research assistant professor in the department of health behavior at the Gillings School of Global Public Health and Brianna Woods, who was a Kelloggs Health Scholar at the time the project began. Lightfoot and Woods were the academic partners, and the director of a local non-profit completed the research team.

“I felt strong in my knowledge of relationships and community,” said Riggins, “but I wasn’t sure of what the impact of working with the University would be.” She said it was a learning process for everyone, and that communication was key to building trust and partnership.

“Communication is so much more that what you can say. It’s how it’s heard, your timing when you say it, your tone, how you position your body, we learned so much about communication and the necessity to mean what you say, say what you mean and making it plain.” 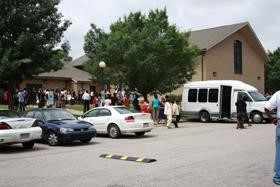 She said as the different team members became more comfortable with communicating and trusting each other, they were able to create building blocks to an academic research partnership that has spanned six years and two additional iterations of the project.  She said being clear about their goals and following through with their plans were an important part of recruiting church participation and earning trust from the participants, too.

“We came around the table from our academic standpoint, wanted to be sure we could code, wanted to be sure  we were community-based,” she laughed. “It doesn’t matter where you’re coming  from, you have to establish the relationship first. It’s trusting each other, but trusting yourself (as a community member) that you deserve to say what’s important to you and what’s not and how you want it to go.”

By creating that trust and validation, Riggins, Lightfoot and the rest of the team were able to hold teaching sessions with church youth about safe sex and protecting themselves from HIV. Some churches allowed them to do condom demonstration and distribution as part of the program, while others asked them to leave those parts out of the instruction. The program led to larger changes in the church’s policies, too.

“They changed the way they talked with their youth,” Riggins said. One church created a program called What Would Jesus Tweet to encourage youth to think about faith in ways that were familiar to them.

“The churches got wings in the impact in community and in their faith. The acceptance of responsibility of the churches for the spiritual growth of the communities they serve and the health and wellness of the communities they serve. We’re trying to equalize teaching and preaching about forgiveness, confessing sins and in the end it comes down to life choices.  They could dare to be different and say something a lot of folks aren’t saying and changing what they do.”

The research team also continued to work with some of the youth in the program and developed a Photovoice project based on the FOY/Impact curriculum, and expanded the program from a pilot test to full implementation, then changed environments from churches to public housing communities and other youth-serving programs. The team traveled to APHA in 2012 and 2013 to present findings from the research, and included Riggins as well as youth participants in both presentations.

Several youth in the study are now in college and pursuing public health careers, largely inspired by their work with the research team.  The project also expanded beyond youth and interviewed faith leaders to get their input on how to develop more interventions.

Riggins said it was important to appreciate the little and big changes and to note the intangibles, as well as the things you can see easily, like water in the potluck line.